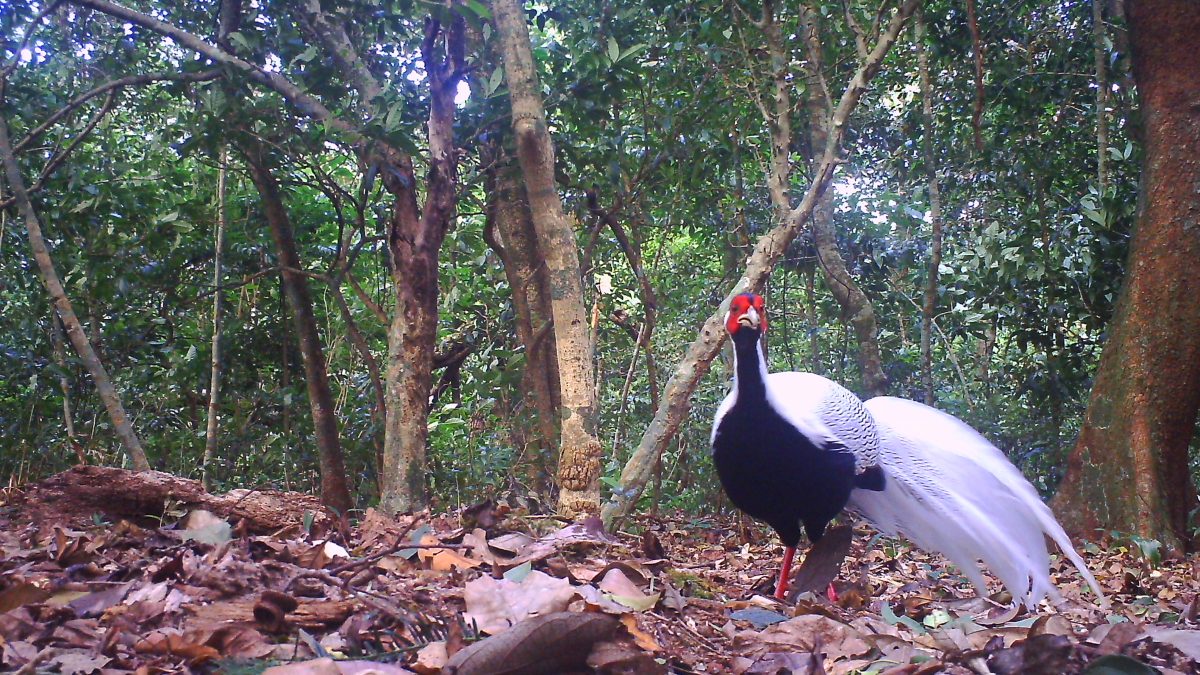 As part of the Biodiversity Research & Monitoring Strategy for Nakai – Nam Theun National Park (NNT NP) implemented by the Watershed Management and Protection Authority (WMPA) and the role of Association Anoulak to advise and oversee the implementation of the strategy, systematic camera-trap surveys were conducted in 2018-2019. The results will allow monitoring of appropriately selected indicator species’ populations to facilitate an assessment of whether some wildlife populations are increasing, decreasing or remaining stable as a result of management interventions implemented by the WMPA and by Association Anoulak (e.g. law enforcement; community sustainable livelihood for conservation; outreach).

The main objective of these surveys is to estimate trends in animal populations (monitoring) over time in the management zones of interest.

The NNT NP is divided into management zones including three Biodiversity Priority Zones (BPZs) (Figure 1) delineated based on their conservation importance at the national and/or global levels and on threat analysis. In 2018—2019, the three BPZs were surveyed with ground camera-traps: a total of 134 camera-trap stations (268 camera-traps) were set-up, with an overall survey effort of 20,183 active camera-trap nights. These surveys will be repeated in 2020 to obtain a first comparison in population trends. (Camera-trap surveys were conducted in NNT NP in 2007-2011 using different methodology preventing comparing results in terms of population trends, however it is possible to compare species records and their frequency. Results of these preliminary surveys have been partially published: e.g. Coudrat et al., 2014a; Coudrat et al., 2014b; Coudrat & Nekaris, 2013). 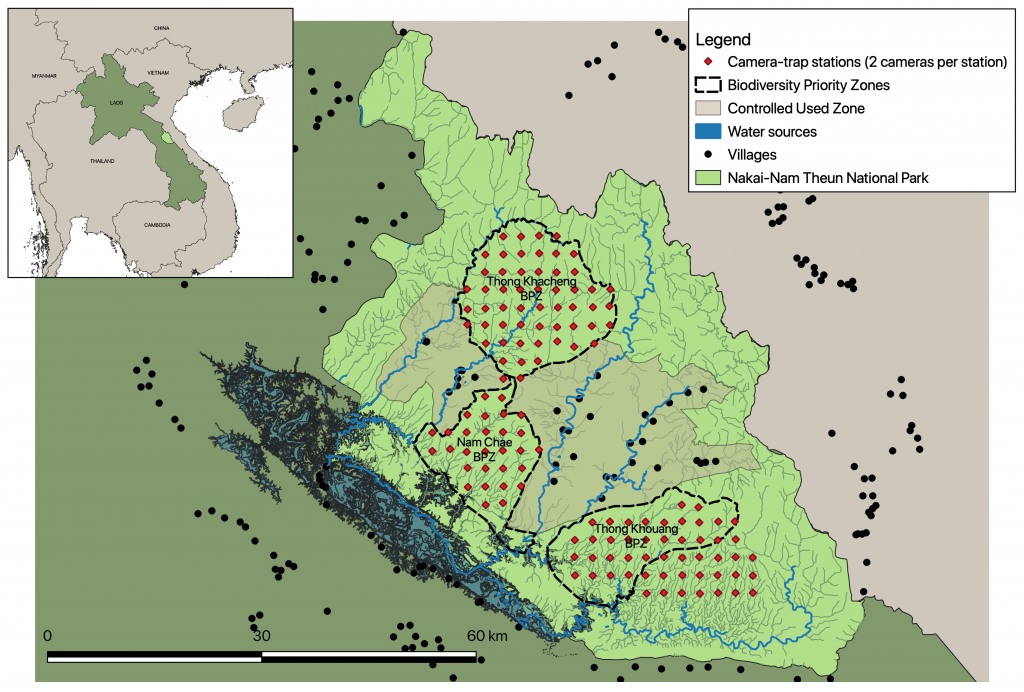 Figure 1: location of Nakai – Nam Theun National Park in Laos and of the 134 camera-trap stations (268 camera-traps) set-up in 2018-2019 to cover the three Biodiversity Priority Zones of the national park. 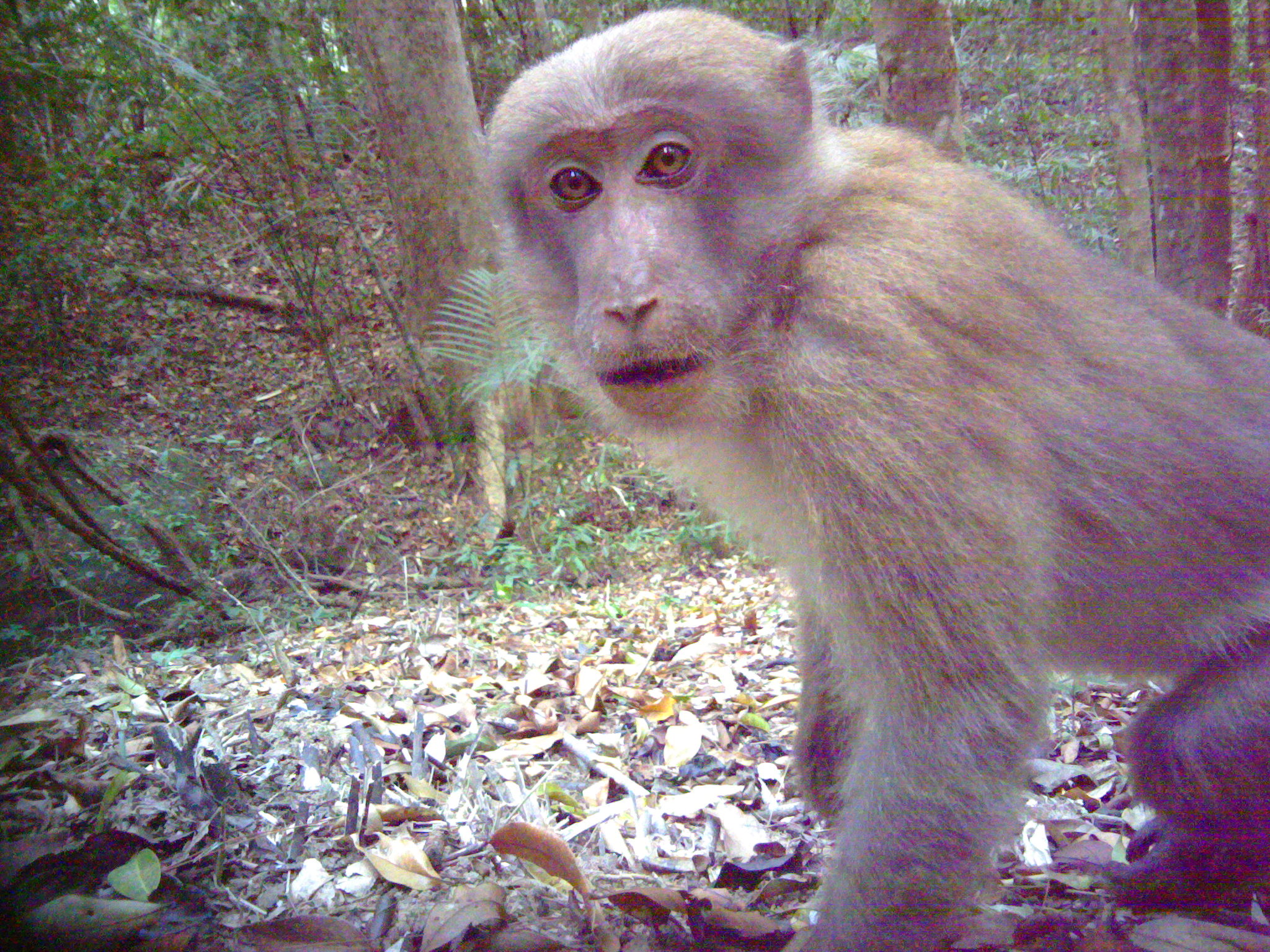 Southeast Asia has long been identified as being the region of the world with the highest biodiversity extinction risk principally from unsustainable harvesting of forest resources (Duckworth et al., 2012; Sodhi et al., 2010; Hughes 2017) and this pattern is observed throughout Laos (Nooren & Claridge, 2001) and in Nakai – Nam Theun (e.g. Robichaud et al., 2009). The wildlife in the national park is severely threatened by illegal hunting, for local consumption and particularly for the international trade. Some species have already significantly declined including cats, small carnivores, ungulates; while others have been extirpated such as Tiger and Javan Rhinoceros (Robichaud et al., 2009; Coudrat et al., 2014a; Coudrat et al., 2014b; Gray et al., 2017) and it is expected that without control over unsustainable harvesting, the most hunting-sensitive and most sought-for species could face local extinction in the near future (e.g. Saola; Large-antlered Muntjac, Sambar, Greater Hog Badger, Binturong, Owston’s Civet, some primates, medium-sized cats, otters, wild cattle, pangolins, turtles). These camera-trap surveys in NNT NP are focussing on ground species only, which are the most directly affected by the intensive snaring happening in the region.

One photograph showed a Sun Bear with a missing paw; this is likely to be a snare-induced wound

These surveys recorded several hunting-sensitive species, such as Hog Badger, Large-Indian Civet, Bears, Pangolins, Muntjacs (including the Critically Endangered Large-antlered Muntjac), Sambar. The fact that these species are still recorded in NNT NP is encouraging and means their population might be able to recover if law enforcement effort are adequate. Other species not recorded during our surveys that had been recorded in the past (e.g. Clouded Leopard, Asian Golden Cat, Coral-billed Ground Cuckoo; Crested Argus; Saola) may indicate their extirpation from NNT NP or their very low density.

Due to the large scale wildlife trafficking in the region, our final report is not shared publicly.

This project was funded by the National Geographic grant number WW-040C-17, the Mohamed Ben Zayed Species Conservation Fund grant number 172516260, Beauval Nature and the Nam Theun 2 Watershed Management and Protection Authority (WMPA). Permissions to conduct these surveys were granted by the WMPA and its board of directors including members from the Ministry of Agriculture and Forestry of the Lao P.D.R. 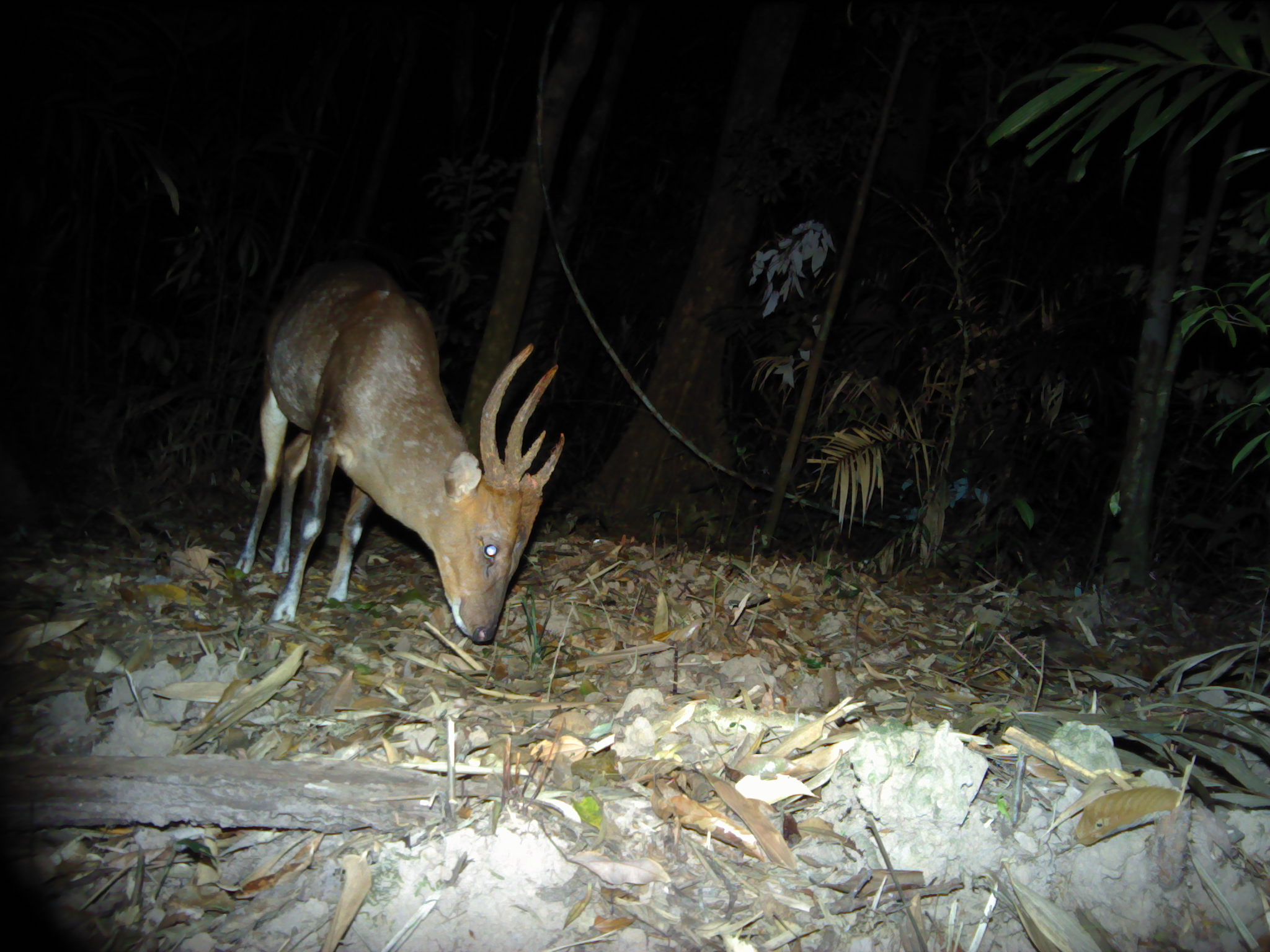 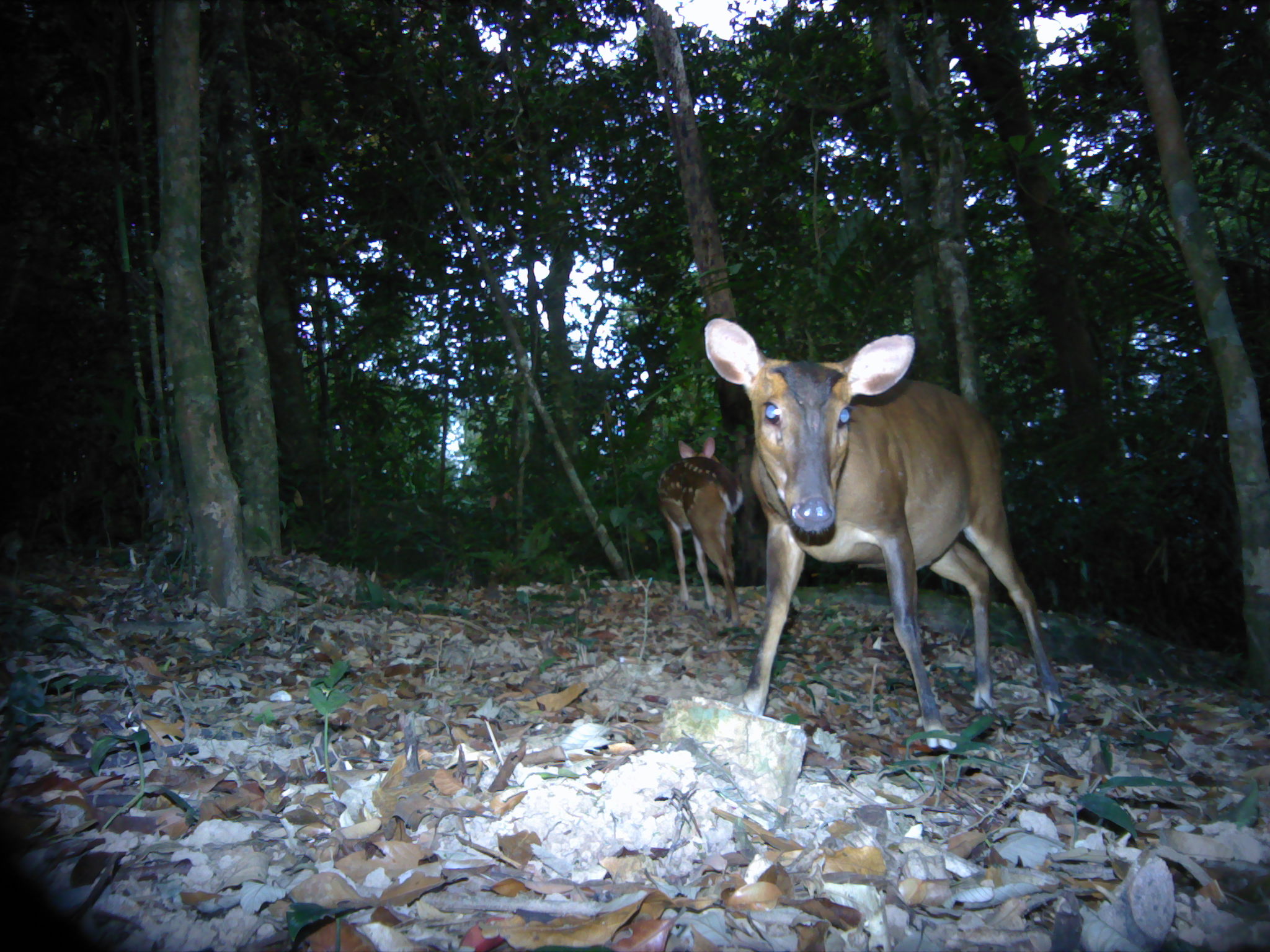 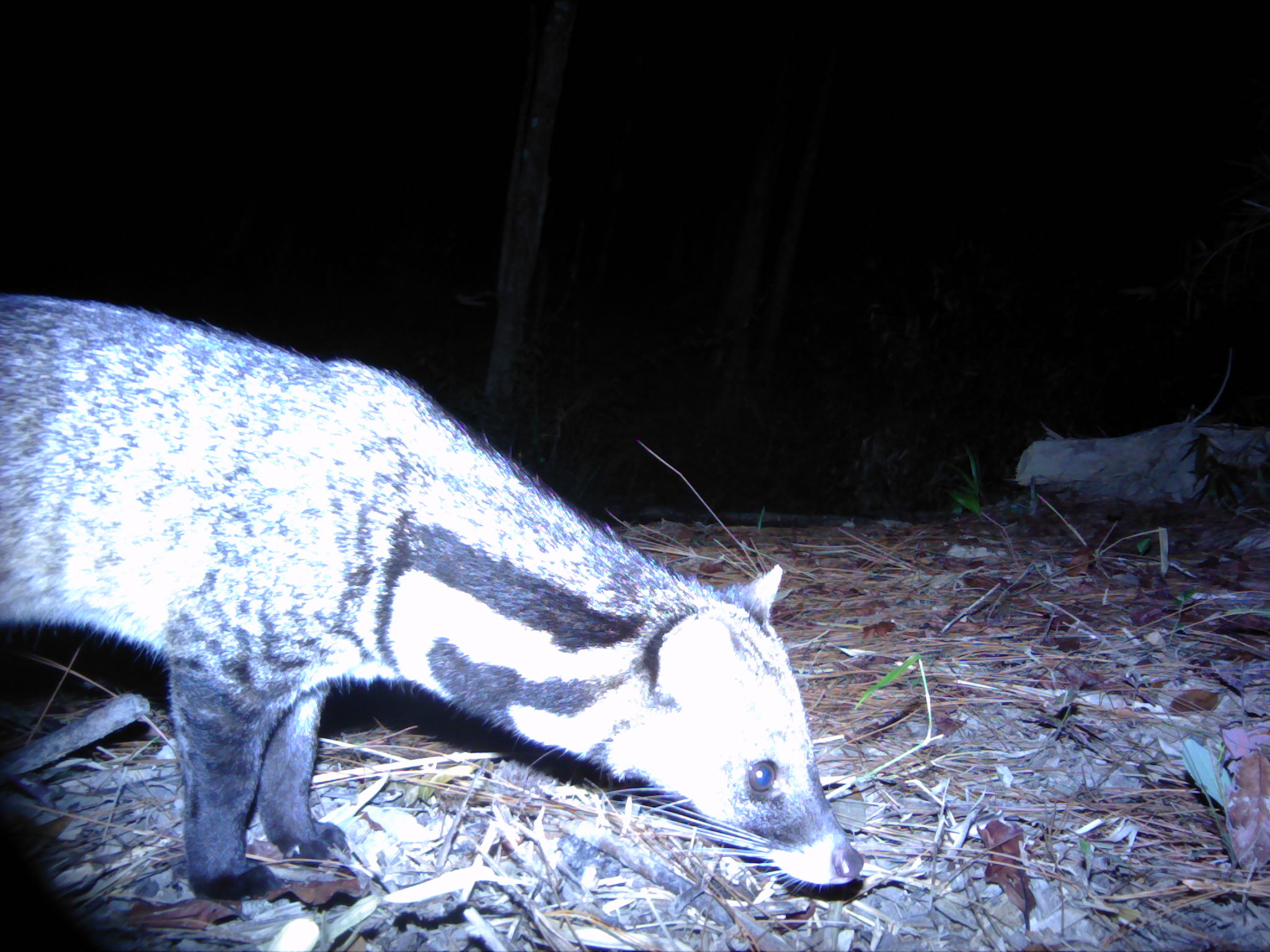